The quest for the perfect burger!!!

The following is an article about us published in the June/July issue of Valley Magazine. We would like to express our sincere thanks to Susan Melish and Valley Magazine for writing and printing this article. The interview, the photo shoot – it was great fun! 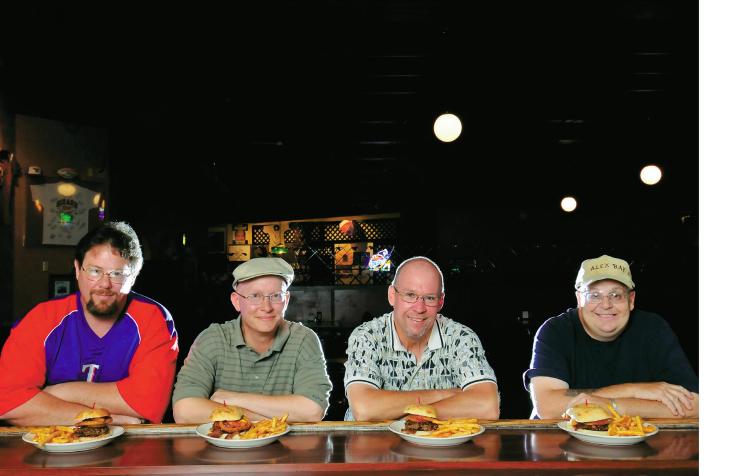 It may look like just another night out for burgers with the boys at Martini Brothers in Girard, but for these five postal workers, it’s as much business as it is pleasure.
before, but their intention isn’t to trash.

Last summer, Tranovich, co-chair of the Mahoning Valley Burger Review Board read about a group of friends ferreting out the best burger in New York City by eating their way through every restaurant in the Big Apple. That got him thinking. “We’ve got great burgers right here,” says Tranovich, recalling that he and Long, his co-chair, decided to conduct a burger challenge in the Valley. “[We] told everyone at the Niles Post Office where we work about our burger plans and invited anyone to join us. These are the guys who showed up. And we have had a blast ever since.”
Once a month for the last year, the Board has picked a local restaurant to review unannounced. They come, eat and rate each burger using an agreed upon scoring system. And they’re not afraid to “call ‘em like they eat ‘em,” Tranovich says, explaining they have given a burger a single star

“If we see where there’s room for improvement, we like to make suggestions,” he says, citing the Mahoning Valley Restaurant as having a fantastic burger that was just too small. “If their burger was twice the size, it could definitely be in the running for the 2010 Burger of the Year.”
Instead, Martini Brothers is in the top spot for this year due to its well-seasoned ground beef, a soft but sturdy Ciabatta bun and first-rate toppings.
“When this all started, no one knew it would take off like it has,” Tranovich explains. After requests they make their findings public, Fuda created a Facebook page (search for MVBRB) and MySpace account where the group’s findings are displayed for 430-plus fans. He also writes a monthly report for The Review. But the group is most excited about the unveiling of its Better Burger Club on Facebook. Become a fan and receive a BBC card, which can be presented to participating reviewed eateries for deals.
But even still, the guys of the Board do not take themselves too seriously. “This is just our opinions, but it is amazing how people like and support what we are doing. My wife doesn’t even laugh at me anymore,” Tranovich says.
How To Rate a Burger
Each member of the Mahoning Valley Burger Review Board can score a burger out of a possible 100 points (no burger has ever been given a perfect rating). Scores are averaged into a star system. Five stars, “best burger you’ve ever had,” equals a total of 96 or higher. Whereas
anything below 55 points garners a mere half star, meaning “go somewhere else.”
Beef counts for 40 points. Buns and toppings can each earn 20. Side dishes and overall presentation each earn 10. Outside factors count, too, including service, cost of the burger, atmosphere and cleanliness. Each can add to, or subtract from, the total score 1, 2 or 3 points.
“Judging burgers is not rocket science, but people are beginning to listen to our opinions and we take that seriously,” Fuda says.